A picture is worth a thousand words. But a screengrab could be worth a whole lot more.

That’s the sentiment coming from the latest group of hackers who were caught using a clever image-based phishing scam that has left most email security systems baffled.

New phishing tactics develop faster than a Polaroid print. As soon as one phishing scam becomes exposed, another is already on its way to the inboxes of unsuspecting victims. Of course, the first step in the process is often the most difficult. The hacker must get their phishing email delivered. Oftentimes, that is no easy task and requires bypassing spam filters, anti-virus software, Secure Email Gateways (SEGs), and any number of general email security programs. Like any anti-phishing solution, one of the first things they try to do is validate content. But what if the email has no content? Certainly, an email with no content can’t be dangerous, right? Well, when it comes to image-based phishing scams, that’s exactly what scammers want anti-phishing defenses to think.

Phone scams have become a new type of phishing threat. In short, they are brand impersonation emails that encourage the reader to contact them by phone rather than click on a link or download a file. Email recipients receive a fake order confirmation from a phisher impersonating a retail company (e.g., Amazon, PayPal, Walmart). These emails, which instruct the recipient to call a phone number if they want to dispute a charge or resolve a fake issue, are structured around a phony order, often for an expensive item. When recipients call the phone number, an operative will try to extract valuable information from them.

These phishing attempts were designed to fly under the radar. They have no links or attachments, so there’s nothing to detect. Threat intelligence feeds, which are the first line of defense for many anti-phishing packages, will never list these emails as dangerous. Additionally, because the majority of these attacks emanate from free-mail services (e.g., Gmail, Hotmail, iCloud), which have high sender reputations, they are able to pass email authentication (SPF, DKIM, DMARC).

INKY has observed bad actors adopting a technique called Image-based phishing in phone scams. This is a phishing email where the textual message is embedded in an image and attached to the phishing email. Said differently, phishers craft a phishing email, turn it into an image, and send only the image to their victims. Most email clients display the image file directly to the recipient rather than delivering a blank email with an image attached. Recipients won’t know that they are looking at a screenshot instead of HTML code with text (i.e. a phishing email) and since there are no links or attachments to open the email feels safe.

The goal of Image-based phishing is to prevent anti-spam and email security scanners from analyzing an email’s text. INKY uses optical character recognition (OCR) that extracts the text from an attached email and uses it in combination with other artificial intelligence algorithms to detect an email as dangerous.

INKY detected bad actors impersonating Geek Squad in Image-based voice phishing (vishing) attacks. INKY users received an email claiming that their subscription with Geek Squad had been renewed for a year and a significant amount of money would be debited from their account within 24 hours. 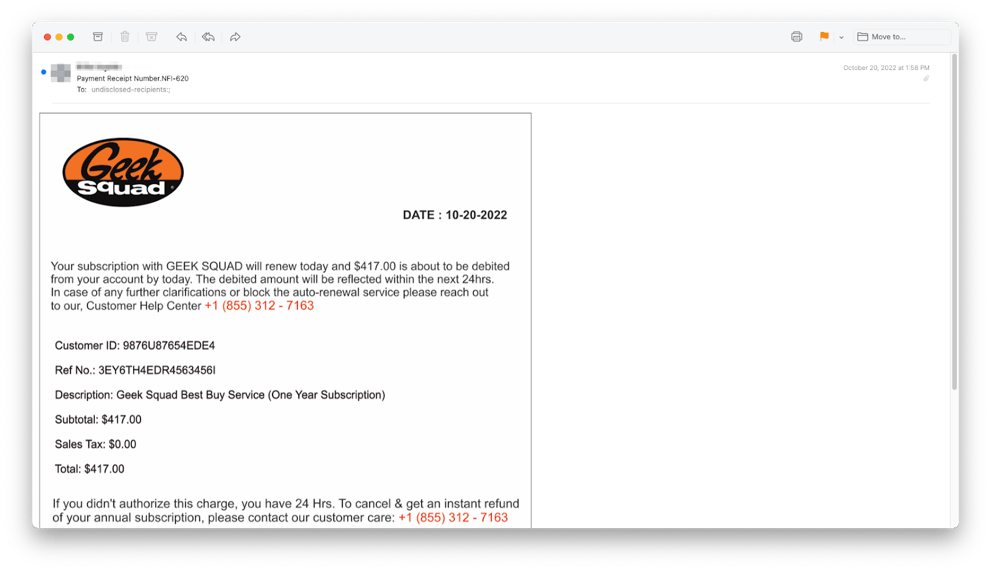 As you can see, the email client automatically displays the attached image file though what was sent was actually an empty email with an image attachment. 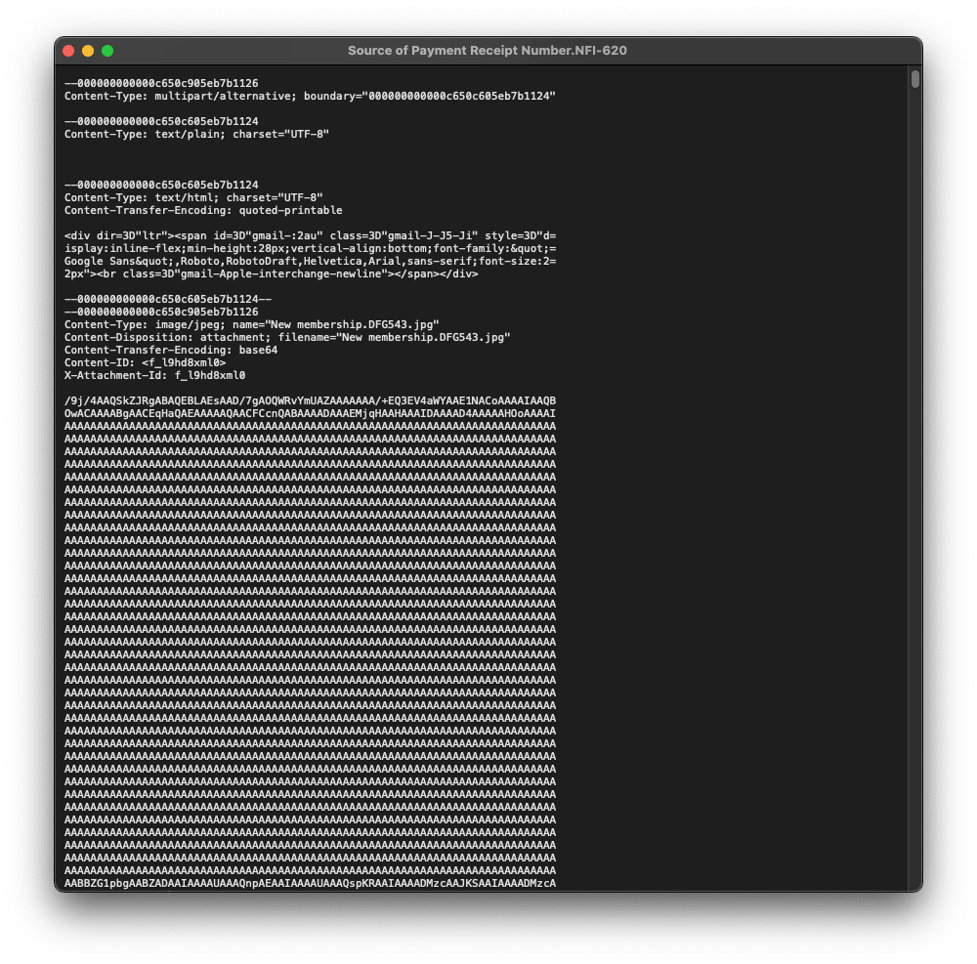 Note that the plain text and HTML versions of the email have no content for email scanners to analyze.

A Note from the Grammar Police

While phishers have a reputation for grammatically sloppy emails, it’s not always easy to notice all the signs. However, recipients with a discerning eye or who thought to visit the Geek Squad’s website for validation may have noticed:

Falling for the Phishing Email

Recipients who call the phone number listed in the email will be met with the following outcomes:

The effectiveness of these techniques relies on the panic a victim might feel if they received an invoice for goods or services that they did not purchase. The emotional reaction to a notification of this sort can be strong and may impair judgment. The natural response is to get right on the phone and try to back out of the order, or, barring that, find a way to obtain a refund. The phishers take advantage of this disrupted emotional state to extract personal or financial information before the victim realizes that something is off.

Let’s summarize some of the tactics used in this Image-based phishing and phone scam.

Given today’s economy it’s especially understandable that someone would quickly react to an unauthorized bank withdrawal. So, imagine if this same type of phishing scam was delivered to your Accounts Payable department. It only takes one frazzled employee to set in motion a chain of events that could effectively drain the company bank account.

INKY is the behavioral email security platform that blocks threats, prevents data leaks, and coaches users to make smart decisions regarding the safety of their email. Like a cybersecurity coach, it signals suspicious behaviors with interactive banners that guide users to take safe action on any device or email client. IT teams don’t face the burden of filtering every email themselves or maintaining multiple systems. Through powerful technology and intuitive user engagement, INKY keeps bad actors out for good. Start a free trial or schedule a demo today.

INKY is an award-winning, behavioral email security platform that blocks phishing threats, prevents data leaks, and coaches users to make smart decisions. Like a cybersecurity coach, INKY signals suspicious behaviors with interactive email banners that guide users to take safe action on any device or email client. IT teams don’t face the burden of filtering every email themselves or maintaining multiple systems. Through powerful technology and intuitive user engagement, INKY keeps phishers out for good. Learn why so many companies trust the security of their email to INKY. Request an online demonstration today.