A large category of phishing attacks comes under the heading of brand impersonation. The idea is to fool an email recipient into interacting with what they think is a known and trusted brand. Recently, data analysts at INKY began to see a pattern of attacks impersonating Verizon, the large U.S.-based telecommunications provider. What made these attacks interesting was their use of mathematical symbols as part of the Verizon logo.

Despite all the money major brands spend on logo design, people are terrible at remembering them. This fluke of human nature plays well into the hands of phishers, who can deceive their victims with made-up logos that look about right. Their graphics may be off, but they do the job. It probably helped the phishers that Verizon has changed its logo a couple of times since Bell Atlantic Corporation was renamed Verizon in 2000.

INKY, which provides anti-phishing technology, detected this Verizon impersonation campaign in dozens of fake emails sent from various Gmail addresses during a two-week period between September 1-13, 2021.

Although Verizon's current logo makes use of a bright red, asymmetrical “V” after the word “Verizon” (which is all lower case in bolded black sans serif), that "V" element does look rather like a checkmark.

INKY found three fake logo variants in the wild. Each made use of a mathematical symbol for the red element. The three impersonations reproduced that element via:

Sample emails are shown below. 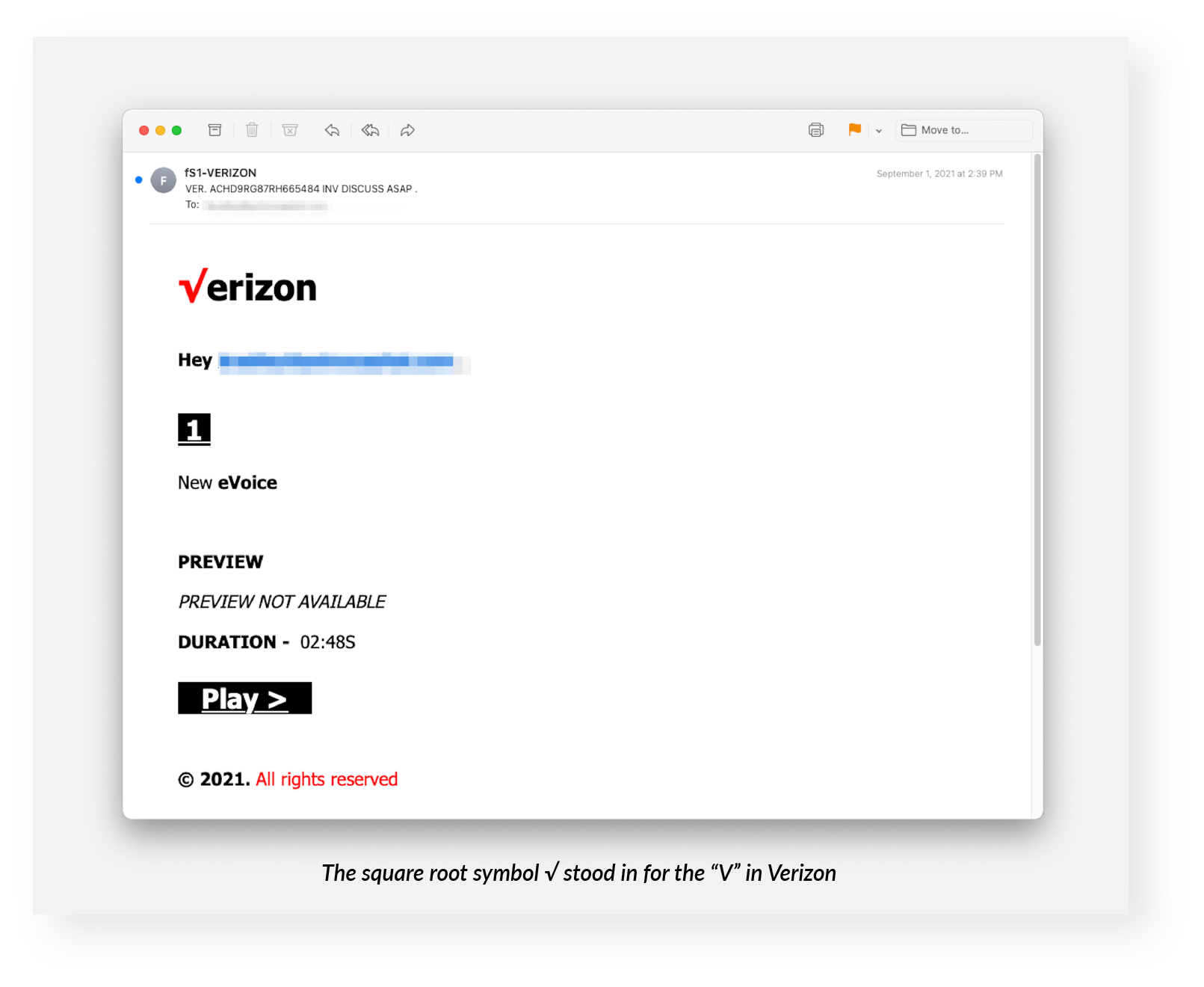 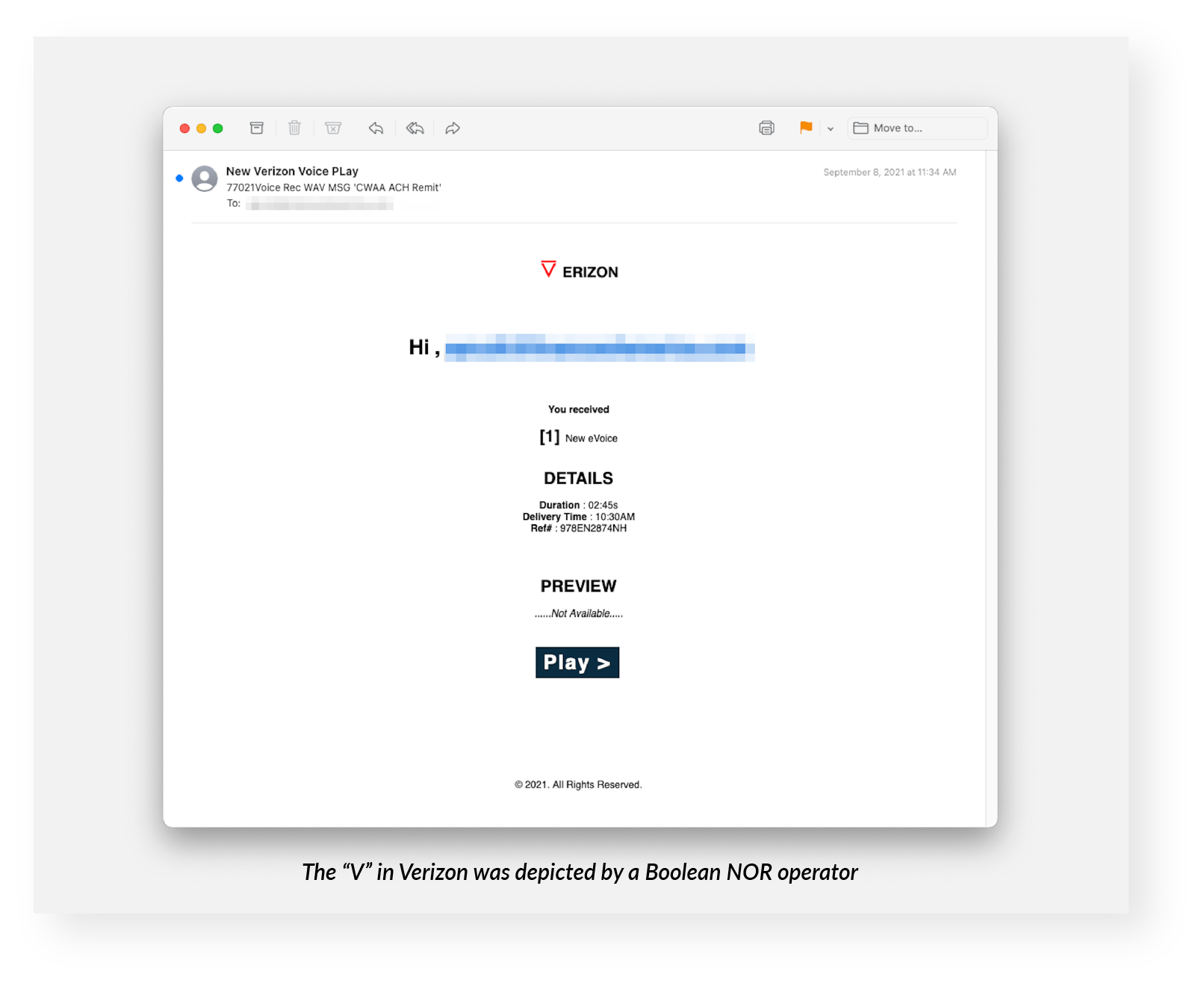 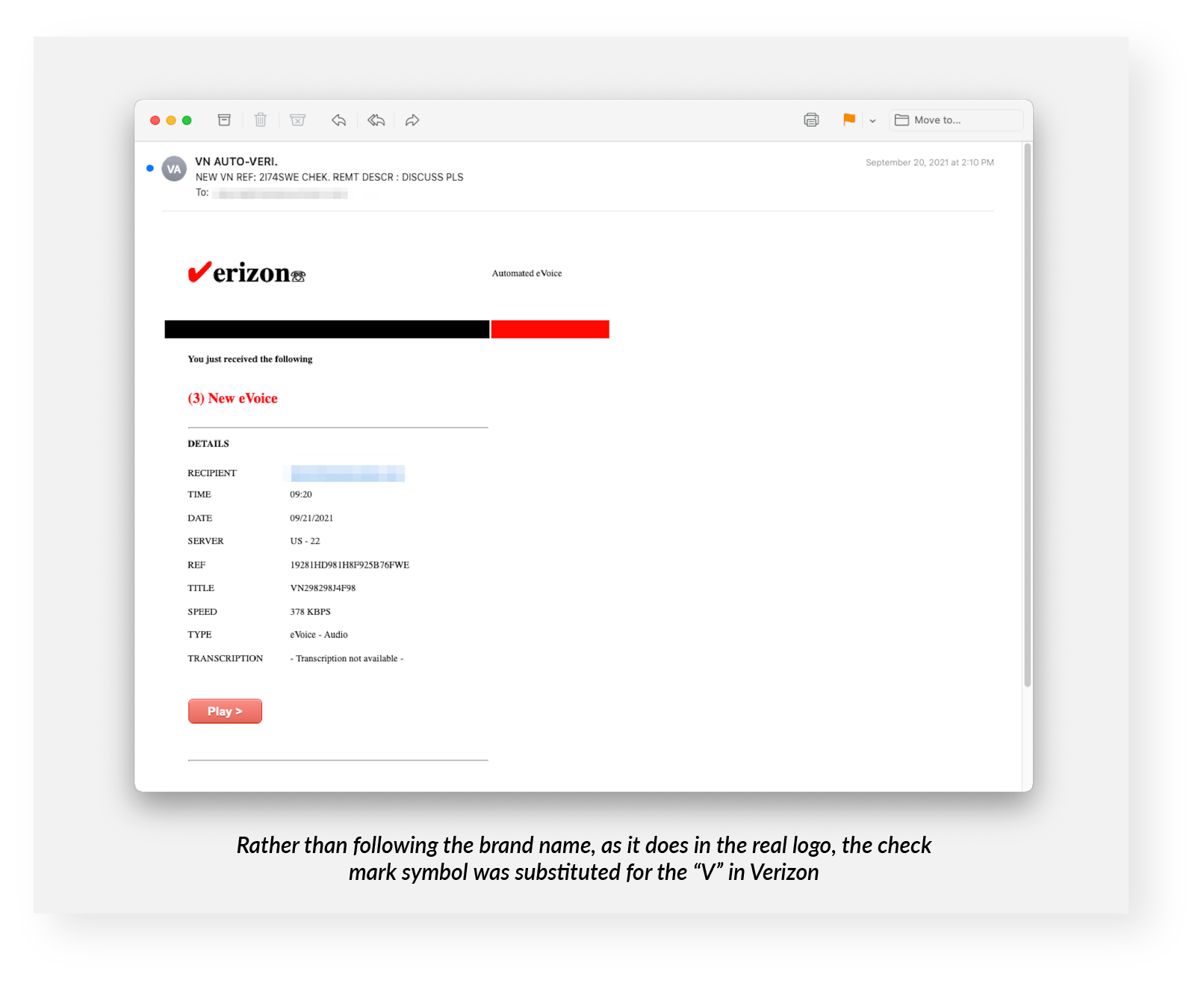 Clicking on the button (black or red, depending on the version) prominently displaying the text “Play >” (made up of the word plus a close-angle-bracket character) led to a site that appeared to be Verizon's, but was in fact a malicious impersonation. The phishers were easily able to steal separate HTML and CSS elements from Verizon’s real site to put together a custom job that included a correct version of the logo! 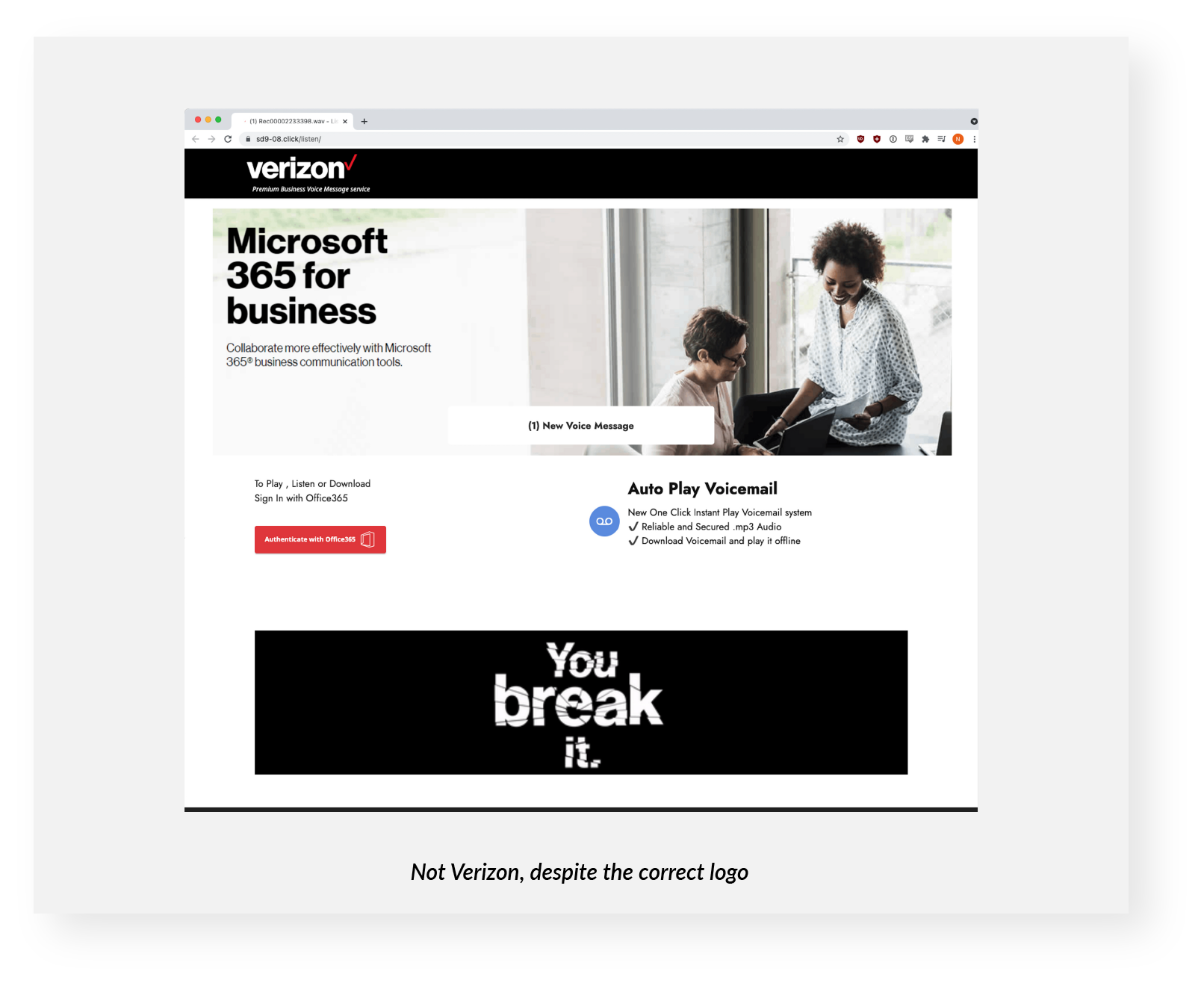 The bad guys created and registered the fake site — sd9-08[.]click — via Namecheap barely a month ago, according to a WHOIS lookup. Namecheap has since taken it down. It now has an NXDOMAIN status, which essentially means it doesn't exist anymore. 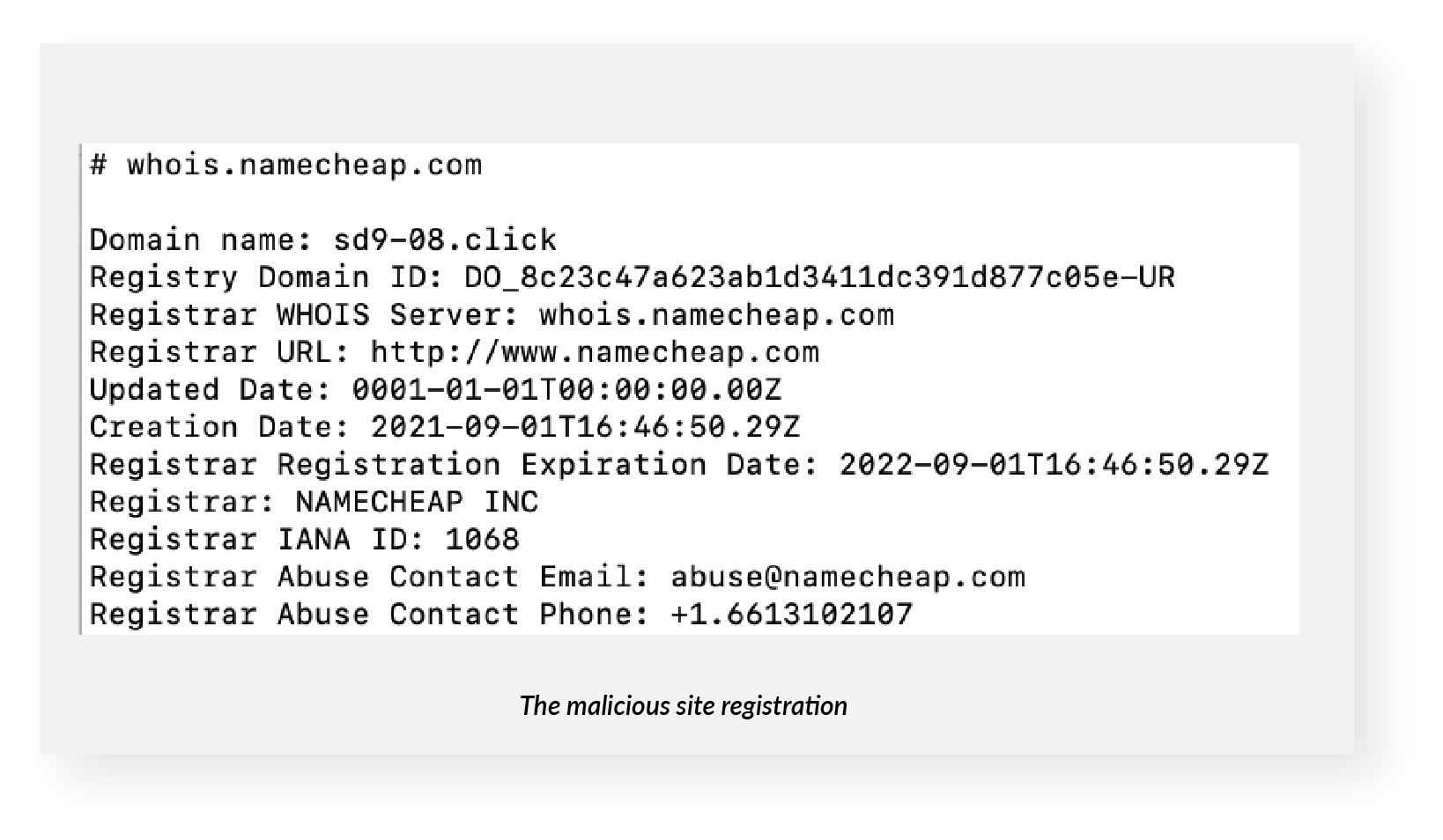 At the bottom of the fake page, targets were invited to “play, listen, or download” their voicemail with Office365 credentials. Using the red “Authenticate with Office365” button led to a fake Microsoft login dialog box. 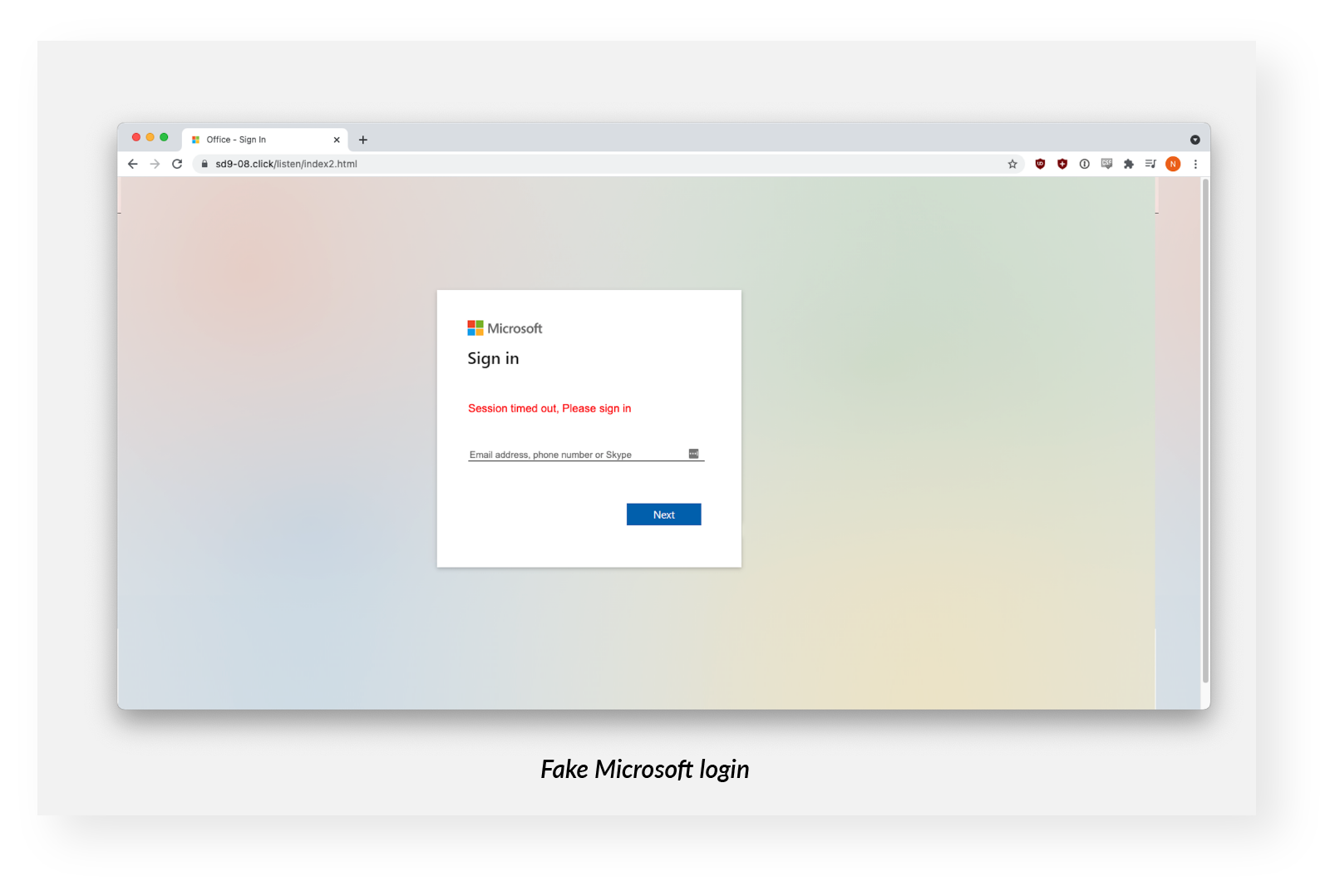 An INKY analyst entered fake credentials into the fake login to assess the site. 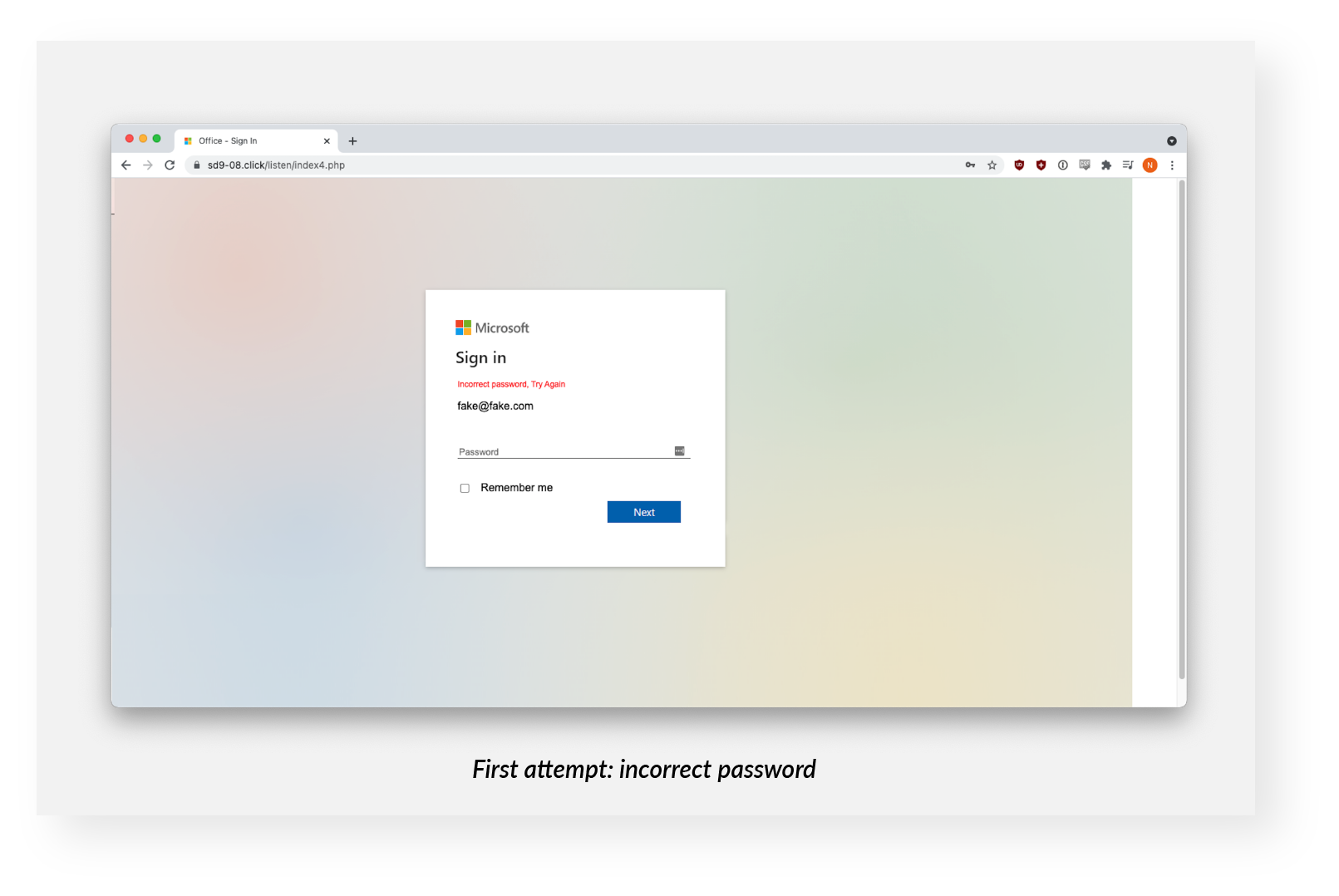 The first attempted login received a response that the password was incorrect. The second attempt elicited a bogus error message. 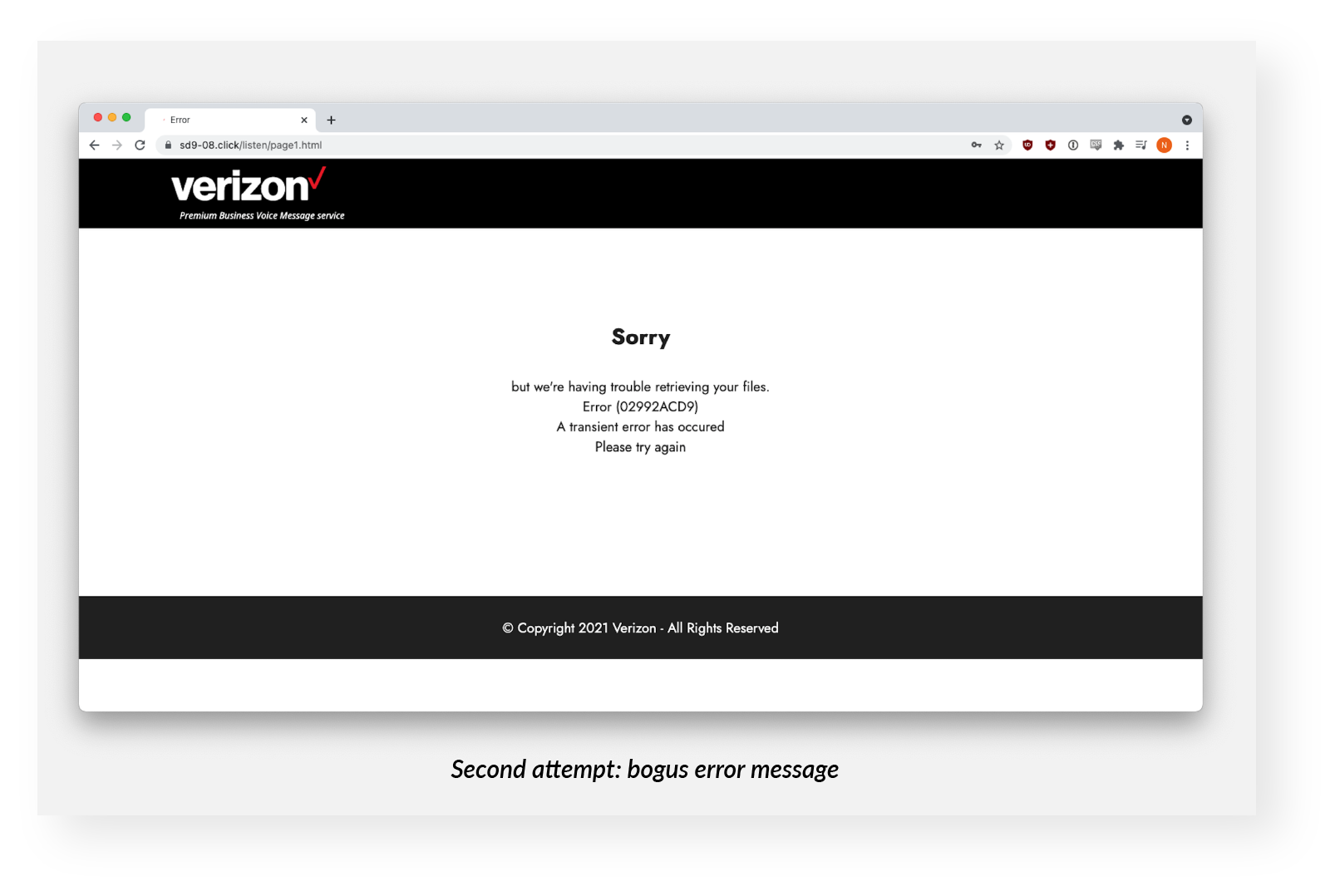 However, the credentials were harvested both times on the backend. This pattern, the double ask, is fairly common. It’s not entirely clear what the phishers are up to, but it's possible that they want the victim to confirm the correctness of the data, or that they hope the victim will try a different account, yielding them two sets of credentials for the price of one.

The phishers sent phishing emails from Gmail accounts because they were able to pass standard email authentication (SPF, DKIM, and DMARC). The malicious site was brand new and presented zero-day vulnerabilities; they had never been seen before and did not appear in threat intelligence feeds commonly referenced by legacy anti-phishing tools. Without a blemish, this site did not look malicious.

Email recipients are advised to be suspicious of voicemail notifications coming from Gmail or other free email providers such as Yahoo, AOL, or Hotmail. They should also distrust emails that claim to be from Verizon but come from a Gmail sender.

Also, in many cases, they can look at the URL of a site that purports to be Verizon to see whether Verizon actually hosts it. This type of analysis will sometimes lead to false positives if a large company uses a smaller firm for marketing support.

They should also be wary if a site asks them to enter Microsoft credentials to view notifications from Verizon (or any other brand).

INKY reported this flurry of phish to Verizon’s phishing@verizon.com address. Although this particular campaign is over, anyone receiving a similar email in the future can report it to that address with their name and account, and phone numbers. Verizon also sent INKY a link to a general security question page, where the company addresses the broader scam landscape.

This article is part of our Fresh Phish series, featuring some of our most interesting phish caught by INKY.