Beginning in January 2021, several INKY users began receiving emails with fake “requests for proposal” (RFPs). These supposed RFPs came from recipients’ legitimate contacts, but those accounts had been compromised by bad actors. In this case, phishers were staging their forays from Adobe Spark, a cloud-based design application that allows users to create and share content. The goal of the ruse was to harvest recipients’ credentials.

Unknowingly, Adobe had been facilitating this campaign for months. Even today, customized documents with malicious links are being hosted on Adobe Spark, and each instance remains active until Adobe receives an abuse report (like the one below) and takes it down. 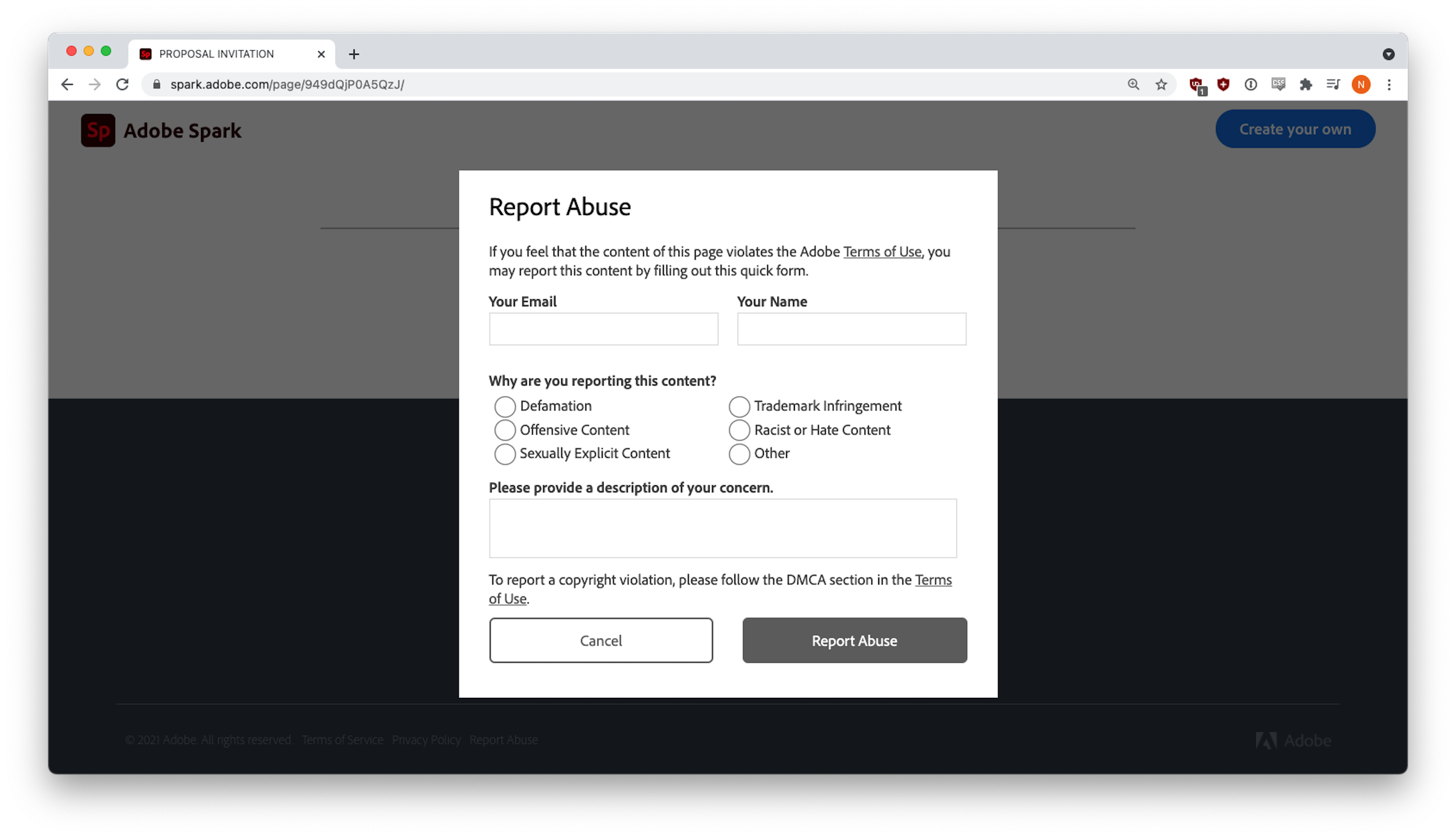 In this report, INKY analyzes the Adobe Spark Request for a Proposal phishing scam.

This exploit made use of several known tactics, combined in a new way. INKY was able to determine that the phishing attempts were sent from known-to-the-recipient but compromised accounts. INKY authenticated the emails' SPF and DKIM records, detected no evidence of spoofing in the received headers, and did not fit them with a First-Time Sender banner notification. Other INKY modules did smell the phish, however, and were triggered strongly enough to set off both Phishing Content and Phishing Site notifications and assign a red banner.

As of this writing, INKY has detected 2,181 of these attacks.

Each of these fake RFP emails was slightly different, but they all invited recipients to submit proposals on Adobe Spark via blue hyperlinks. Clicking the link would take the victim to a customized document on Adobe Spark like the one below.

If the target was sophisticated enough, they might have hovered over the white “VIEW RFP DOCUMENT” button and seen the malicious link: 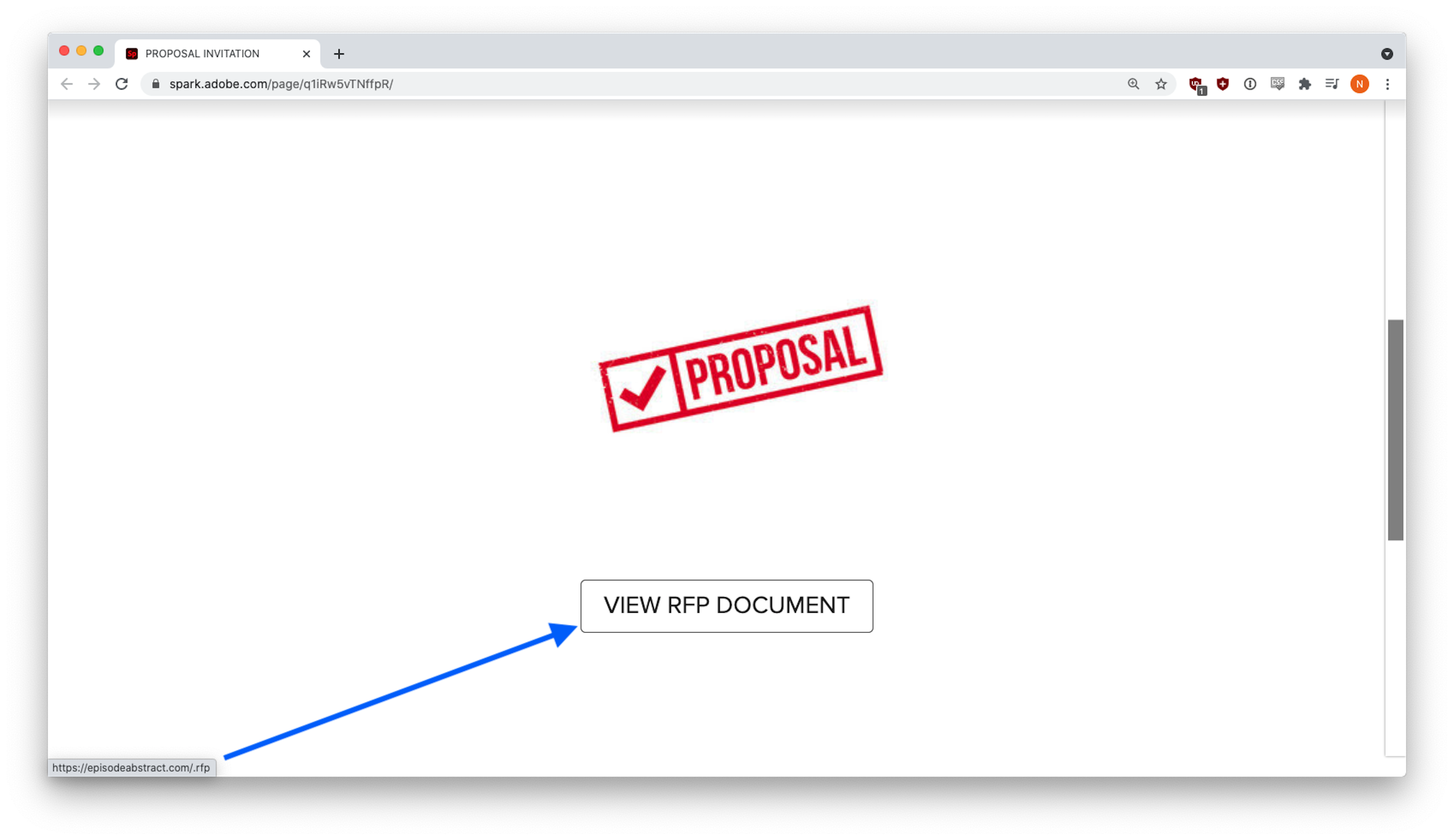 It turns out, episodeabstract[.]com was a recently created domain controlled by the phisher.

And the malicious link appeared in several threat intelligence feeds. By placing it on Adobe Spark, the phisher avoided detection because the only link that appeared in the phishing email was a reputable spark.adobe.com URL that most email security vendors view as safe. The malicious link went to a phishing site that impersonated Adobe.

The user was prompted to sign in with their email credentials to view the document. 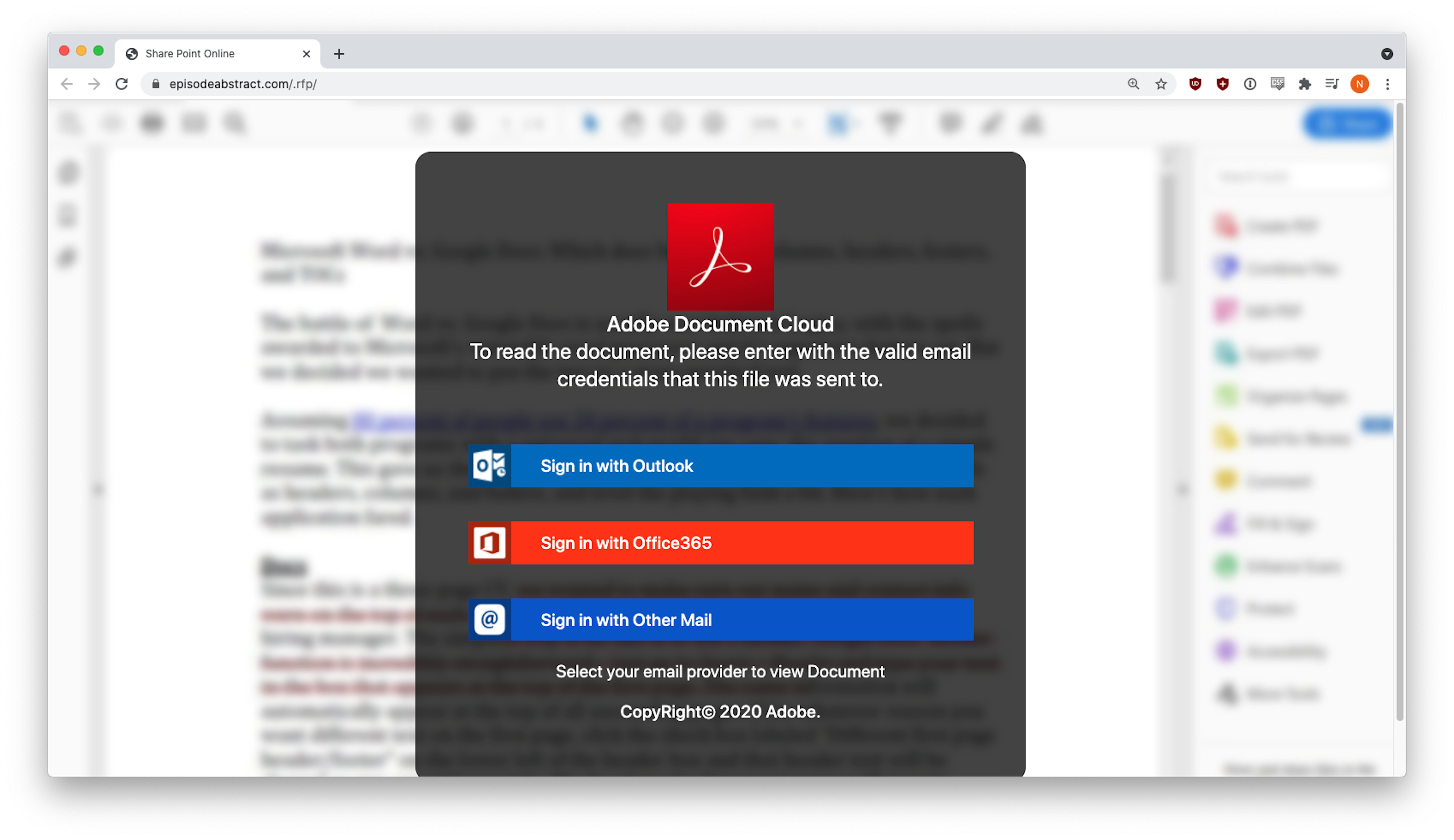 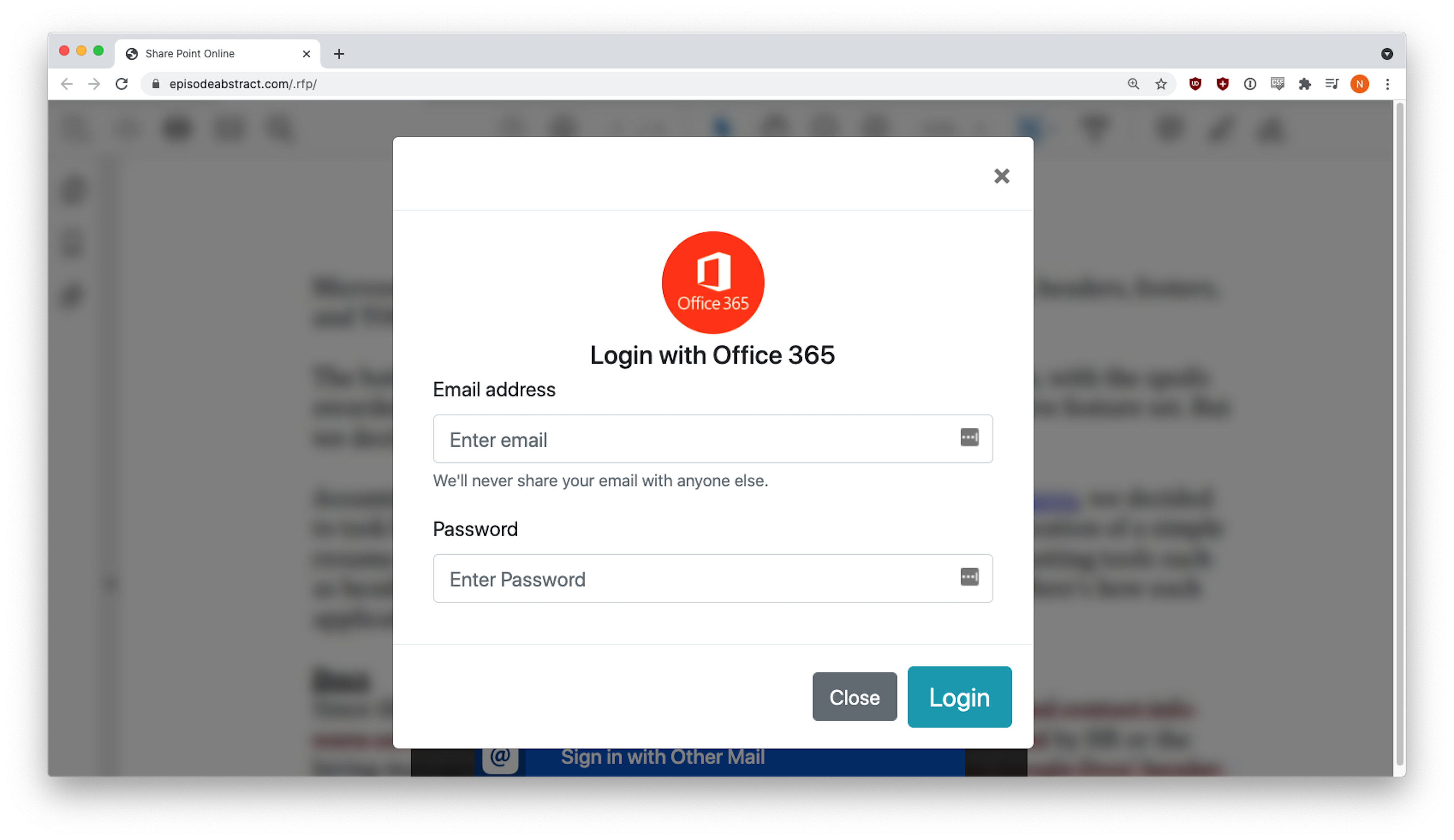 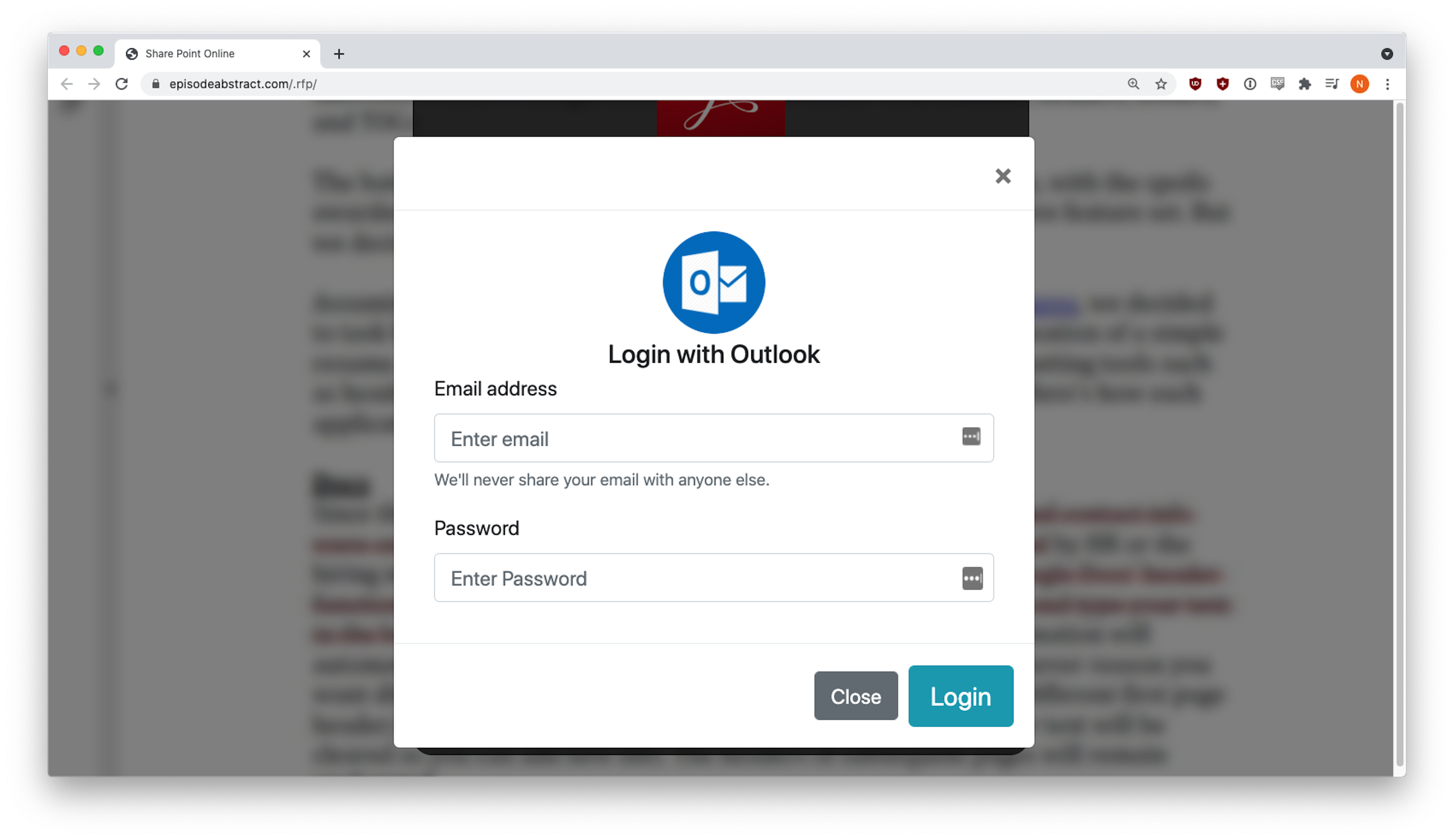 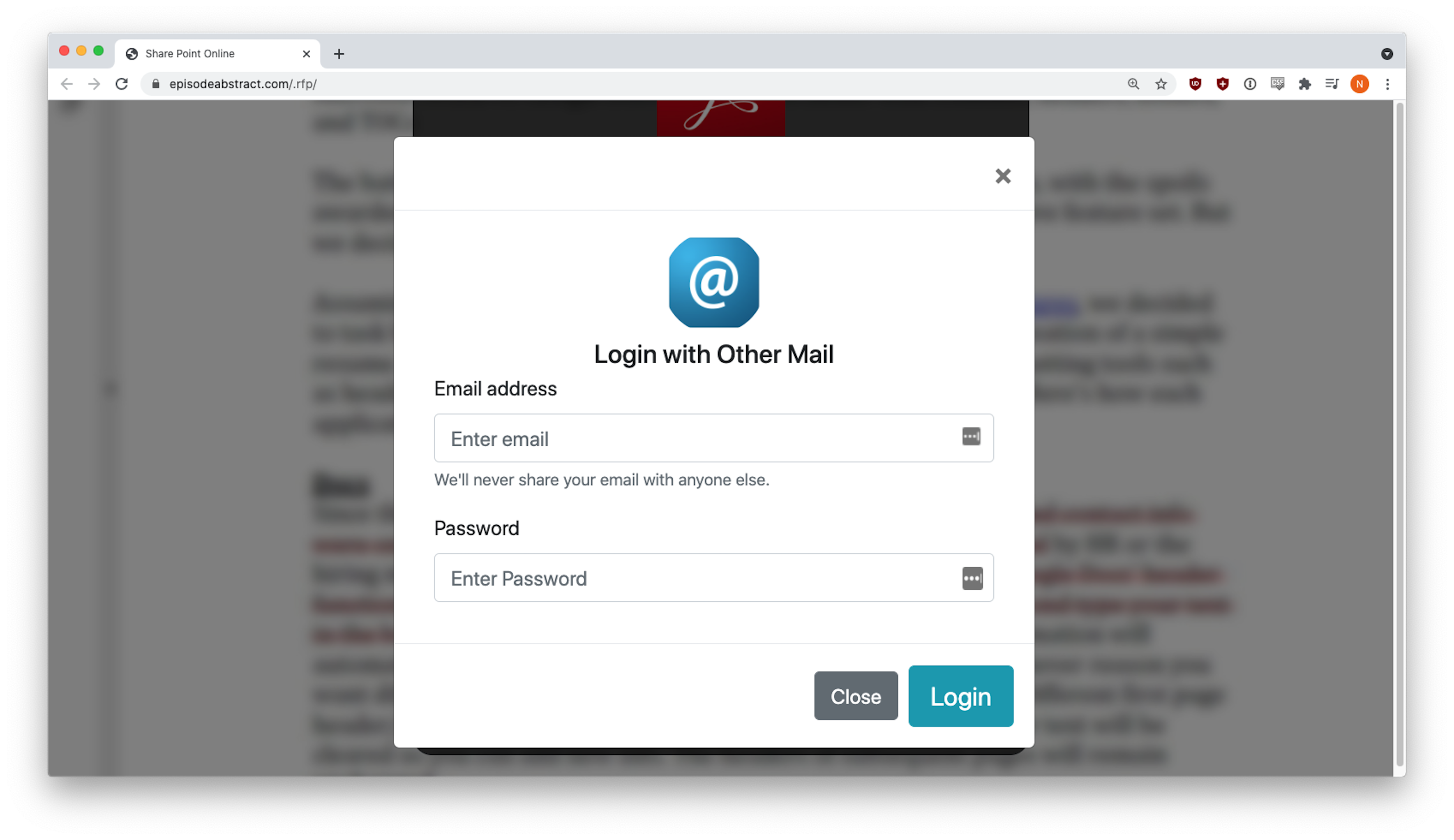 INKY engineers got a fake error message the first time they entered fake credentials, but behind the scenes, that data had already been sent to the phisher. This tactic is fairly common. The victim sees an error message, but the form captures their input anyway. 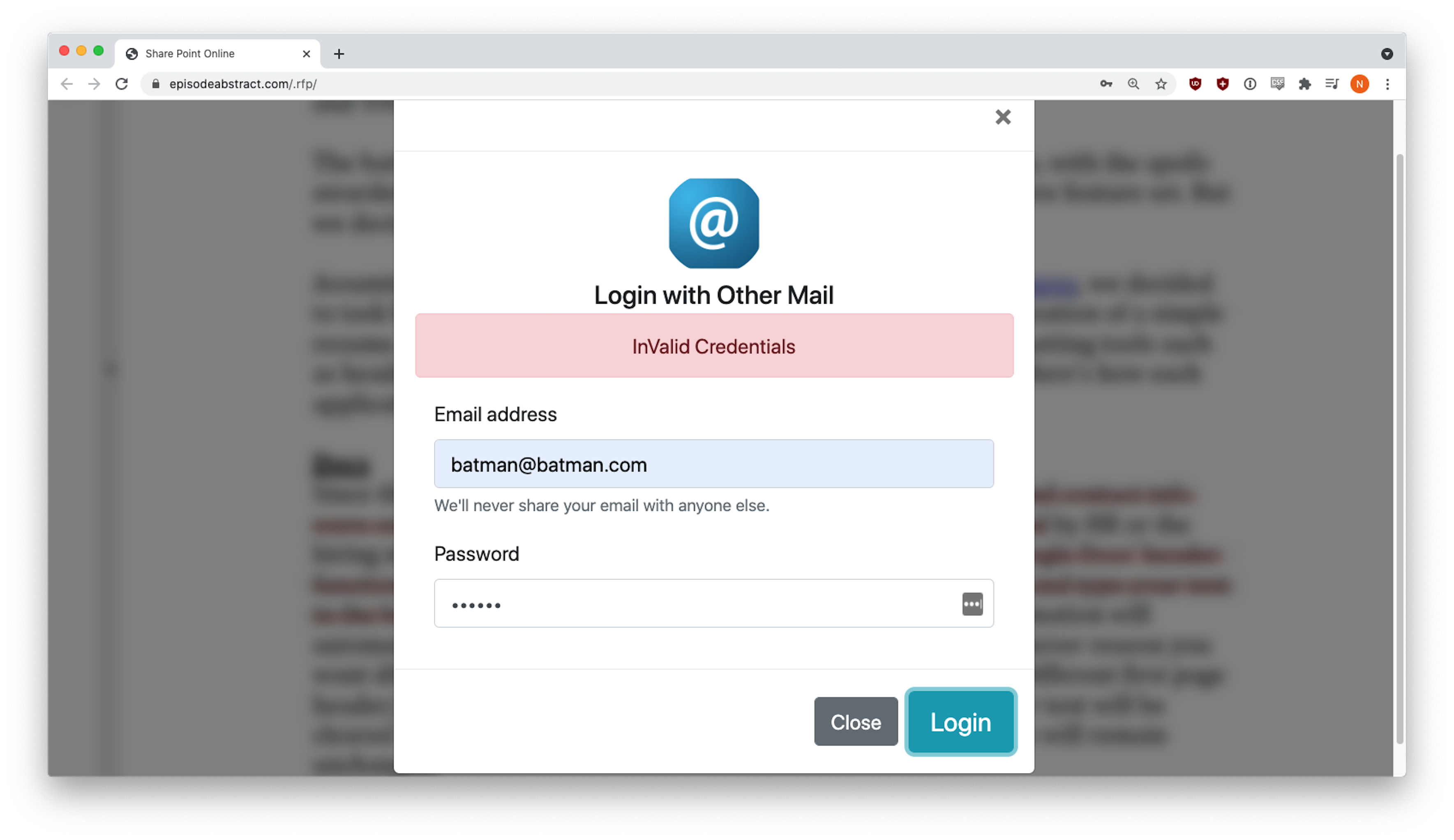 Phishers are nothing if not clever and resourceful. On our second login attempt, the phishing site tried to remain undetected by logging us into a real Microsoft site. Since we used fake credentials, we got a real Microsoft error.

The following section contains three examples of Adobe Spark RFP attacks. In each one, phishers created customized documents on spark.adobe.com and sent from hijacked accounts phishing emails with fake RFPs to known contacts. The phishing emails all had links to the Adobe site, where credential harvesting links awaited the hapless victim.

This email was pretty good-looking; that is, it did not contain any of the usual spelling, grammar, and usage mistakes that sometimes tip off the intended victim. This attack could be particularly pernicious, since it apparently comes from a known contact, seems to be serious, and has a slight (but not too intense) whiff of urgency about it. 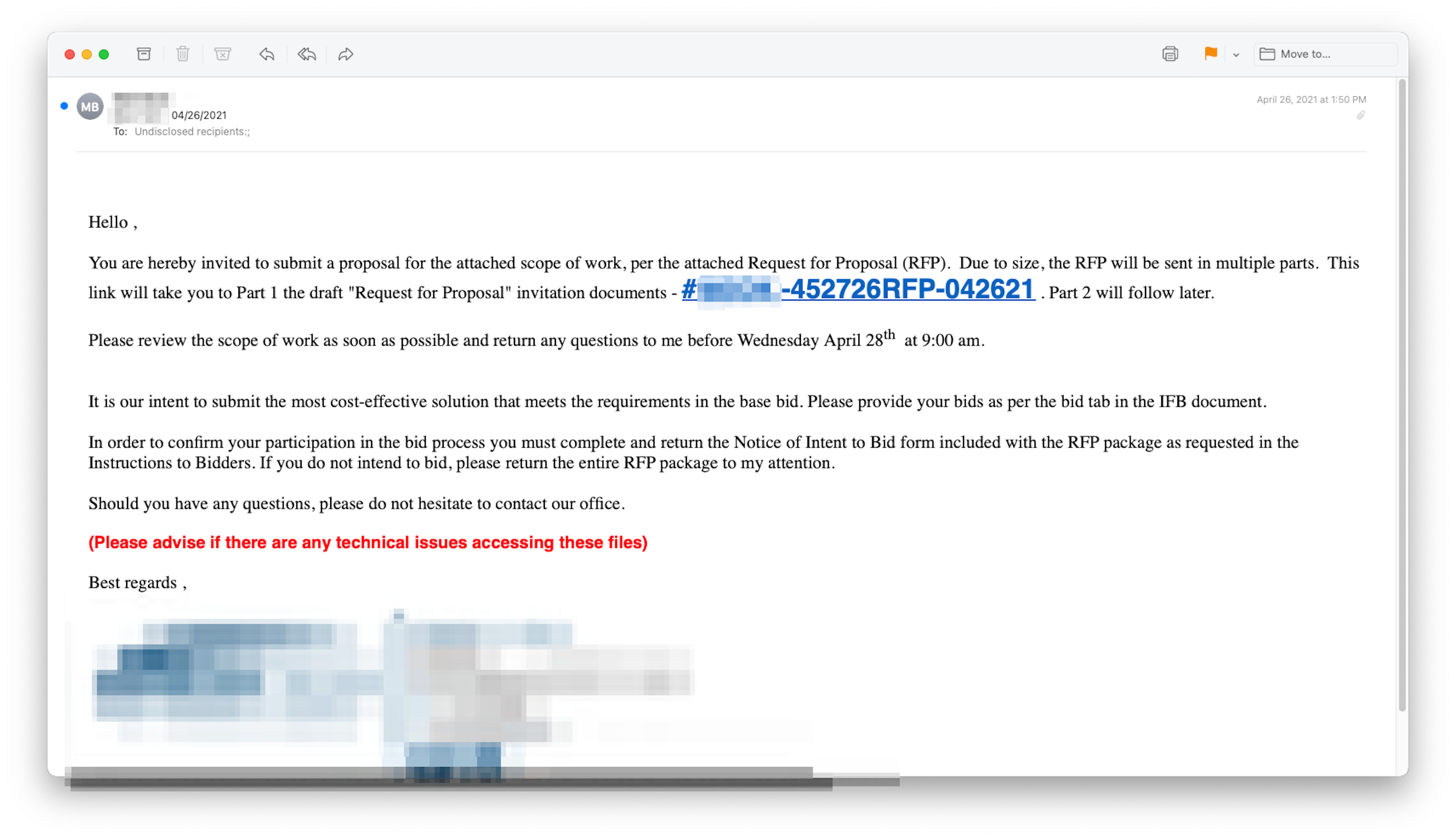 This attempt appeared to come from a free Filemail account, but in fact, the phisher has just thrown the Filemail logo into the email to make it look more convincing. The email came from a supplier of construction equipment, but the account had been hijacked.  That sender and domain were known to the recipient since INKY did not detect a first-time sender. As in the other examples, the link led to Adobe Spark, and the goal was credential harvesting.

Again, the phisher did not make any usage errors in this foray. The pitch was clean, simple, and only mildly urgent. Under the View Proposal button, was a link that led to a booby-trapped Adobe Spark site. 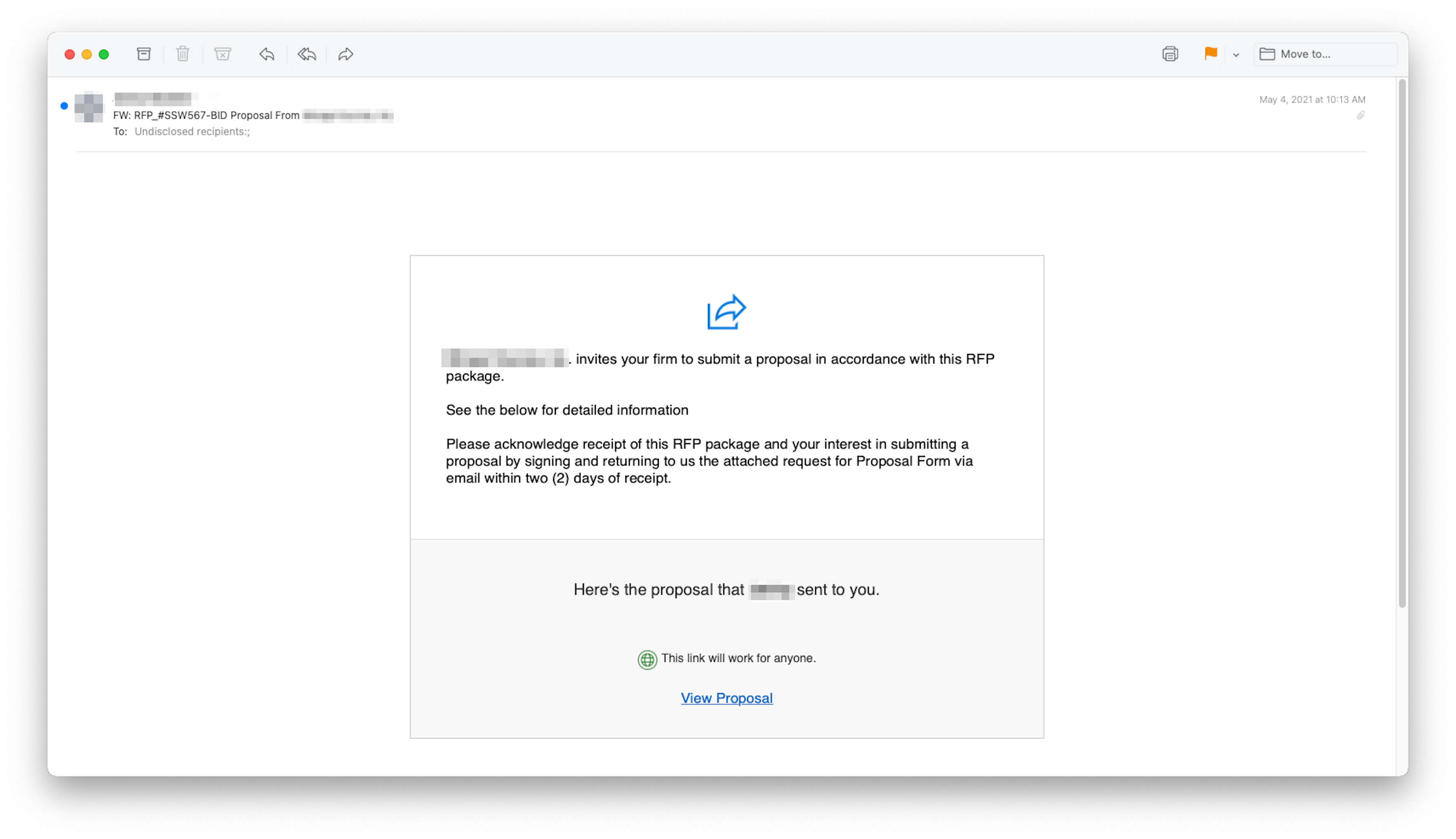 Phishers are constantly modifying their techniques. They do so because the white-hat community starts to catch up and put in place countermeasures that render existing techniques obsolete. What makes this particular formulation effective is that the emails were sent from known (but hijacked) accounts, quieting any first-time-sender alerts that might otherwise be triggered. A byproduct of sending from a known account was the ability to pass the DKIM and SPF analysis of traditional security products. Then, the link led to a legitimate (but compromised) website, putting any link analysis and malware detection off the scent. If the intended target got that far, they were highly likely to type in their email credentials, leading to the phisher hijacking their account and starting the whole cycle over again.

At the moment, most security products are unable to detect this type of exploit. Some of the highly scalable techniques (i.e., DKIM and SPF analysis) will not reveal the malign nature of the sender. Normal link rewriting and sandboxing will likely not turn up anything foul because the URLs are perfectly legit; nothing wrong with Adobe.

The only way to catch these phish for sure is to check the links in every email against a list of known abused cloud sites. If the domain in a link is on the list, the security software needs to crawl the page looking for phishing content. The analysis needs to know what to look for and take corrective action when it finds something wrong. Such detection takes a bit of an effort, but the security result is well worth it.