During her monolog on the Moth podcast back in 2011, Satori Shakoor described how she returned to dating sometime after mourning the deaths of both her mother and her son. “So, I went on Craigslist,“ she told the live audience, " 'cause Craigslist deliver right now.”

Craigslist, that old-fashioned website people still use to find things locally — and urgently — has become the latest phishing vector. In addition to the inherent time pressure of its marketplace, a feature on the site that appeals to phishers is the mail relay function. In the service of safety and anonymity, Craigslist lets people seeking or offering things send an email through the system to anyone else. What the recipient sees for a sender’s address is <a long hex string>@<subdomain>.craigslist.org. Craigslist knows the identities of everyone, but unless a correspondent discloses details, they are perfectly anonymous to others on the system.

This situation suits phishers just fine. They can shoot their poisoned arrows from behind a local mail proxy. And shoot they did — a number of times in early October.

In early October, several INKY users received real Craigslist email notifications informing them that a published ad of theirs included “inappropriate content” and violated Craigslist’s terms and conditions. The notifications gave false instructions on how to avoid having their accounts deleted.

In our analysis, we learned that a common thread among recipients of this particular phish was the fact that they were active Craigslist users. The notifications were “real” in the sense that they really did come from a Craigslist domain, but they were fake in the sense that Craigslist itself, either its humans or its machines, did not intend to send them. Without verification from Craigslist, we can't be sure, but it appears as if Craigslist was compromised since the recipients were not random (they posted ads on the platform) and the emails originated from Craigslist. 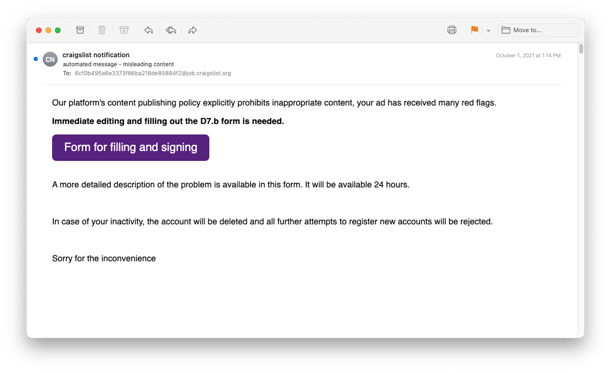 However, if a recipient tried to rectify this supposed problem by clicking on the big purple button, they were taken to a customized document uploaded to Microsoft OneDrive. It appears as if bad actors were able to manipulate the email’s HTML to create that button and link it to OneDrive. Recipients were then instructed to use the “Download” link on OneDrive to fill out the form and return it to violations@craiglist.org.

Hovering over the link revealed a Russian domain (myjino[.]ru).

Uncompressing the file revealed a macro-enabled spreadsheet named “form_1484004552-10012021.xls,” a document that had already been flagged by security vendors.

Not a good spreadsheet

The spreadsheet impersonated DocuSign and also used Norton and Microsoft logos to imply that the file was safe. DocuSign does not in fact have a service called “DocuSign Protect Service." The company itself observed this particular misuse of its brand in a posting on the alerts section of its website from November 2020. It does have a service named “DocuSign Protect and Sign.” 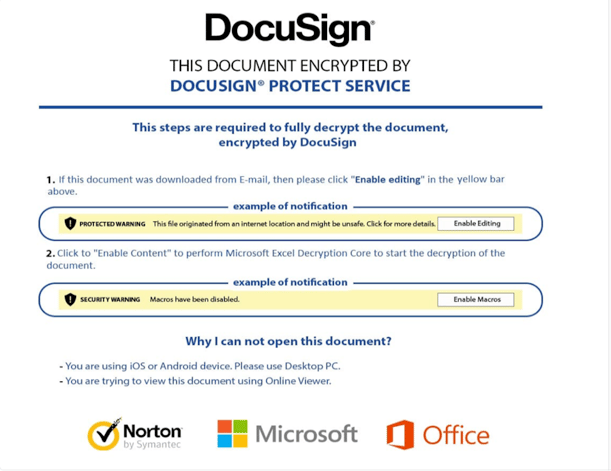 Not DocuSign, nor Norton, much less Microsoft

Users who clicked on “Enable Editing” and “Enable Content” bypassed Microsoft Office security controls and allowed the macros to be executed.

We confirmed malicious activity in a malware sandbox. Files were created and modified. The malware also attempted to make external connections to download more components or exfiltrate data, but these attempts received a “404 not found” error. 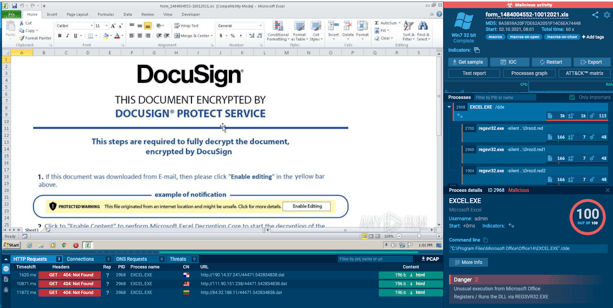 View from the sandbox

The error was likely due to a mistake on the part of the bad actors, or it's possible that the malicious content was discovered on those hosts and had already been taken down.

If this attack had been successful, some of the possible outcomes could have been:

Sent from an authentic Craigslist IP address (208.82.237.105), these attacks looked like real Craigslist email notifications, which, because they appeared to be legitimate, were able to pass standard email authentication (SPF, DKIM, and DMARC). 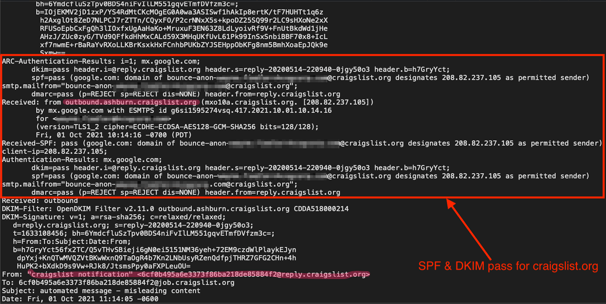 In this case, the recipient (the potential victim) had indeed posted a help-wanted listing, seeking a housekeeper in Moscow.

The phishers were able to manipulate the Craigslist email system to send a fake violation notification to that individual. Since the URL to resolve the issue hosted a customized document placed on Microsoft OneDrive, it did not appear on any threat intelligence feed, allowing it to slip past most security vendors.

Recipients should be on the lookout for unusual requests. A red flag ought to go up right away if a violation notice comes in that doesn’t correspond to any recipient behavior on the platform in question.

Another red flag is the mixing of platforms. It doesn’t make sense to resolve a Craigslist issue through a document uploaded to OneDrive.

Recipients should also be suspicious about the indirect way they are being asked to sign the form. Proper protocol would have the form attached directly to the email rather than requiring a trip up to OneDrive and an additional link-click there.